Travelling around the world and seeing it’s wonders is a dream for everyone. People are travelling to foreign countries more than ever and global tourism industy is booming. However, for the muslim community making a travel plan might be a lot harder than you think sometimes. Not all the destinations in the world are offering services for the different expectations and needs of the muslim travellers such as halal food and prayer locations. Also, there is the ugly truth of increasing xenophobia and Islamaophia in some countries which obviously gives goosebumps to muslim community.

Istanbul on the other hand is one of the best options for the muslim travellers and families who would like experience an unforgettable holiday. With it’s unique culture, history, climate, cuisine, nature and archtitecture; Istanbul attracts millions of Muslims and non-Muslims every year. In this article we made a list of reasons about Why Istanbul is the Best Muslim Friendly Tourist Destination in the World?

By the way, if you are planning to visit Turkey for your honeymoon and you need suggestions about things to do and places to visit in Turkey; you may visit the “asiahoneymoonguide.com” website. In one of their article, they shared very useful information about things to in Turkey on honeymoon.

Istanbul is one of the most cosmopolitan cities in the world where the most of the population is muslim. The city is a melting pot of people from different religions, cultures and lifestyles. Turkey is a secular country. Unlike many other muslim countries, people can wear whatever they want in public places and wouldn’t draw attention or feel uncomfortable.

It’s highly unlikely for a muslim tourist to experience an islamophobic bullying in Istanbul. Unfortunately, in many popular destinations in Europe, muslim women are more likely to experience anti-Muslim sentiment, particularly if they are wearing a headscarf, hijab or burka. Likewise, for those muslims who would like to enjoy a little bit more free lifestyle than the ones  in their homecountry, Istanbul is a free zone full of adult entertainment venues and bustling nightlife .

Last but not least, as the most develepod city of the Republic of Turkey, Istanbul has a very good public safety infrastructure and low crime rates which helps tourists feel safer and relaxed during their vacation.

2) Religious services are available across Istanbul

There are mosques in almost every corner in Istanbul which makes life a lot easier for muslim tourists. Muslim tourists can hear the calming sound of Adhan (Azan / Call to Prayer) five times a day. Almost all of the mosques nearby touristic areas in Istanbul offers a designated wudu and praying area for woman.

3) Istanbul has a deep-rooted history and culture

There are some cities in the world which stand out with it’s unique culture. Istanbul is definetely one of those cities. Istanbul served as the imperial capital for Roman, Byzantine, Latin and Ottoman empires for almost 16 centuries. Legacies of these empires can be seen in every corner of Istanbul. The city is full or architectural gems. Thanks to it’s geographic location, Istanbul naturally embraces both the East and the West. The city  In 2010, all this beauty was as the European Capital of Culture by the European Union. Today, Istanbul continues it’s reputation as the cultural capital of Turkey with it’s thriving art scene that attracts millions around the world in spite of the rapid social and political changes. 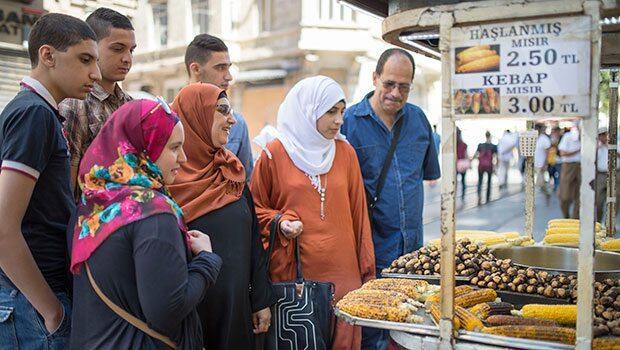 Compared to other European tourism capitals in Europe, Istanbul has always been an affordable tourist destination for those on a budget. However, due to the rapid decrease of Turkish lira within the last 3 years, the city has become even more affordable than ever before. In August 2018, The Turkish lira has slumped to record low of 7.24 against the US Dollar. Currently it’s been traded around 5.90 USD. This devaluation makes everything extremely cheap for those who earn and spend foreign currencies.

You can find plenty of 3-4 star hotels in Istanbul for 50-100$ per night. Depending on the season and availabilty, you can even find a room in 5 star hotel with a Bosphorus view for 350-400$ per night. Dining out and night life is also very affordable in Istanbul. You can enjoy a dinner table full of mezes, kebabs and drinks which will only cost you around 10-20$ per person. You can expect to pay the same for a Traditional Turkish Breakfast. Cheaper or more expensive alternatives can always be found in the city depending on your budget.

Tickets for transportation, museums, historic sites and entertainment venues are so cheap that it will encourage you to go out and explore.

5) World Famous Cuisine Which is Halal

You have probably heard a few things about the richness of the Turkish Cuisine by now. It is an undisputable fact that the Turkish Cuisine is one of the best in the world which appeals to everyone’s taste. Baklava, kebab, ice cream, döner and Turkish Delight are the first ones that comes in to mind but these are just the tip of the iceberg.

Delicious foods are available for every budget and taste in Istanbul. You can either snack on the cheap yet delicious street food or you can reserve a table in an upscale restaurant by the breathtaking view of the Bosphorus. Best examples of the unique cuisines of Turkey’s geographic regions are all represented very well in Istanbul’s bustling dining scene. The best part of this situation for the muslim tourists is that 99,9% of the restaurants in Istanbul serve halal food.

6) Istanbul Has Plenty of Shopping Venues

From hundred years old bazaars to upscale shopping malls full of high-end fashion brands, Istanbul has limitless alternatives for those who are looking for great deals. Thanks to the decreasing value of Turkish Lira and modern infrastructure of the shopping venues, Istanbul continues to maintain it’s ages old reputation as the shopping hub of the region. Istanbul is home to the worlds oldest shopping center; the Grand Bazaar which is a covered market with more than 4000 shops and was built in the 15th century to make the city a capital of commerce. However, if you want to hit the streets, Istiklal Avenue is the must go place with dozens of shops, restaurants, cafes, street musicians and performers.

7) Reaching to Istanbul and Navigating the City is Easy

Istanbul is a destination that is very easy to reach. From its main base Istanbul, Turkish Airlines has direct flights to more than 300 destinations. Many other airline companies also has direct flights from major cities around the world. Thanks to the recently opened new Istanbul Airport, number of destinations with directs flights is expected to increace within coming years.

Getting around in Istanbul is also very easy. Istanbul has a highly developed public transportation infrastructure even though the city has been divided by the Bosphorus Strait. You can cross the Bosphorus by using the metro, ferry or one of the 3 bridges spanning between Asia and Europe. Public transportation cards are available at more than 2000 authorized dealers throughout Istanbul. In addition, you can purchase 1-Pass and 2-pass cards from nearly 1000 Biletmatik machines (Ticketmatic – Automatic Filling Machines).

Although the best time to visit Istanbul is spring or autumn, the city has a nice climate all year round. Istanbul experiences all four seasons but both in winter and summer, climate is acceptable and extreme tempratures are not common. In fact, many tourists from the Middle East and Nort Africa are visiting Istanbul in summer to get away from the extreme heat in their countries.

In 2018 nearly 40 million tourists visited Turkey. As a touristic destination, popularity of Turkey is increasing after a tough a few years and tourism industry is booming again. Thanks to this recovery and growth expectation, investments in tourism industry is also rising. New hotels and entertainment venues are opening every day in an effort satisfy the needs of tourists flocking to Istanbul and other major cities in Turkey. If you are planning a visit to Istanbul, chances are you are going to see lot’s of modern and newly opened facilities whereever you go. These newly opened facilities are offering both comfort and luxury in order to stay competitive in the ever changing tourism market.

10) Health & Aesthetic Clinics in Istanbul are Modern and Affordable

Istanbul is a rising medical tourism center. It attracts thousands of visitors every year from Europe and Middle East who wants to heal while they are on vacation. The reason why Istanbul become a health tourism hub is because it has state of the art clinics which are accredited by international organizations and offers health and aesthetic services. The medical staff in Turkey is highly trained and facilities are very modern. These modern yet affordable facilities provide services in dentistry, orthopedics, oncology, aesthetic medicine and more. Unfortunately, these services are either very expensive or provided in a not so modern facilities both in Europe and Middle East. Turkish Goverment subsidizes the medical tourism sector and encourages private sector to open new clinics.

View all of admin's posts.

Best Hotels in Istanbul as of 2019

Click to see the most luxurious hotels and experience Istanbul the Sultans way.

Click on the image to find out cheapest and most convenient airport transfer options to the Istanbul Airport.

Discover the most sacred holy relics of the Abrahamic religions. As the former capital of the great civiliziations such as the Byzantine Empire and the Ottoman Empire; Istanbul houses historically important holy sites and relics of Christianity, Islam and Judaism.

10thingstodoinistanbul.com is a platform for sharing travel information for Istanbul. The information we try to share in this platform includes; useful tips in the city, shopping and dining advices, travel plans, accommodation advices, knowledge about Turkish culture and cuisine, deals and events in Istanbul.